What follows is our take on the storyline, characters and production of what was one of the most highly anticipated blockbusters of 2022. 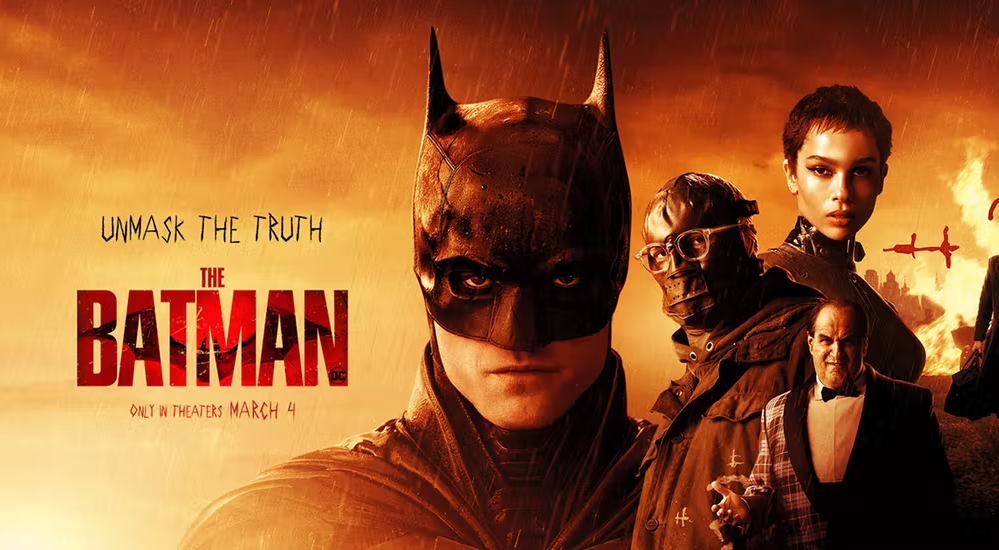 We all know the story of Batman. Brooding mask figure? Check. Haunted by a tragic past? Check. Exerting his own sense of vigilante justice on a city teeming with corruption? Check. It’s a tale as old as time. Despite its long-standing history, however, the DC multiverse has kept the Batman’s legacy alive and thriving through various renditions from the 1997 Batman & Robin, starring George Clooney and Val Kilmer, to the 2016 Batman v Superman: Dawn of Justice, starring Ben Affleck and Henry Cavill. This year, the hat has been passed on to director Matt Reeves, who puts yet another twist on the beloved classic, with Robert Pattinson donning the formidable cape and Zoë Kravitz assuming the femme fatale role of Catwoman.

It’s about time we’ve moved on from the hype of Batman crossovers with other DC superheroes (even though Aquaman and The Flash will always have a place in our hearts), and start exploring opportunities to examine Bruce Wayne as an individual. Reeves’ The Batman offers us just that. This isn’t an origin story, nor is it a sensationalistic merger of a star-studded cast; it is a provoking, intimate glimpse into the scarred psyche of a greatly flawed antihero. What follows is our take on the storyline, characters and production of what was one of the most highly anticipated blockbusters of 2022.

The Batman’s storyline weaves together a good amount of action, mystery, and social commentary. Setting the tone for its dark narrative, the film begins with death. In the opening sequence, Gotham city’s mayor is the victim of an elusive killer who dubs himself “Riddler”. We see fractures within the crime fighting community as Bruce Wayne is forced to leave the official investigation due to his status as a vigilante. It soon becomes clear, however, that Batman is the target of the Riddler’s mind games, when investigators discover that leaving cryptic messages for the caped fighter is part of the Riddler’s MO.

This plot point launches us into a psychologically-driven race for time. A large part of Batman’s investigative techniques rely on interrogating his past foes or having complex back-and-forth with his villains. In fact, he’s probably one of the few “good guys'' that interacts the most with his monsters, creating an intriguing relationship dynamic between hero and villain that oscillates between hatred and mutual benefit. In this case, the Riddler becomes a sadistic gamemaker who leads Batman on a wild goose chase, capturing an increasingly frustrated Bruce in a game of cat-and-mouse with Gotham city as the chessboard and its innocent citizens as pawns.

Then comes the endgame. Unravelling his way through the Riddler’s twisted web of manipulation, Bruce discovers a groundbreaking link between him and the villain that leads him to question his past (don’t worry, no spoilers here). Plot twists aside, the film also calls the question the darker side of social media, as the Riddler, somewhat akin to the modern influencer, enlists the help of ihs online followers in staging his bomb-riddled finale before his eventual capture.

With all his maculine prowess and mysterious allure, Ben Affleck’s Batman was definitely no less than iconic, but Pattinson’s masked character adds a more vulnerable dimension to the stoic character. While it may be difficult for us to divorce Pattinson from his breakout role in Twilight (let’s face it, Edward Cullen is a hard skin to shed), he assumes the role of Batman well. Putting to rest concerns about a teenage heartthrob not being able to fill the shoes of a surly antihero, Pattinson’s caped crusader gives unprecedented depth to the character.

Watching this Batman, we get a sense of instability, like he himself isn’t all that sure about his identity and moral standing. His status as a “hero” or “saviour” is built upon deeply-rooted insecurity and blurs the line between good and evil. His fights are oddly personal, as if he isn’t quite fighting for the sake of helping the victims attain justice, but more so to soothe his own inner demons. Bruce the orphaned—lonely and disgruntled by the cards he has been dealt—is never truly separated from Bruce the Batman—an anonymous yet public figure relied upon by all to somehow save the day, even though he can’t seem to save himself from his own ghosts. It becomes all too clear that this is a hero who is painfully human—having no supernatural power except for material goods, intellect, and an inspiring drive to reform a city that caused him nothing but suffering.

The Batman doesn’t stray from your average superhero film in that it offers you a visceral watching experience, featuring quintessential elements like impressively choreographed fight scenes and sensationalistic sets, special effects, and stunts. Clad with nostalgic styles reminiscent of other Batman films, the sets in The Batman feature a noir-inspired aesthetic, effectively conveying the grit and realism of life in a city festering with crime and vices. You can still expect to feast your eyes on the spectacle of iconic shots like the sprawling skyline of Gotham city and the Batmobile flying out from the flames of an explosion.

Reeves has revealed that the film has offered him the opportunity to try his hand at VFX technology, seamlessly marrying it with other practical in-camera elements. What comes of this is a unique aesthetic that raises the bar for video production. Using The Volume (a relatively new technology invented by Reeves and a couple of other filmmakers), Reeves was able to bring the movie’s actual virtual background right onto the set, providing actors with a more immersive space to enact their craft.

And you might be wondering: what about those epic car chases? (You certainly cannot make a Batman movie without at least a couple of them.) Car chase sequences are commonly thought to be created with CGI or Volume technology, but a large part of The Batman’s awe-factor comes from the ingenuity of its production. Remember the scene where the Penguin escapes from Batman in his car? That’s all real! Reeves put Colin Farrell in an actual car mounted to the side, with a truck actually crashing amidst an explosion in the background. There’s something thrilling about knowing that supposedly impossible feats you see “only in the movies”, can actually be recreated in real life. Be sure to look out for these elements and how they change your viewing experience the next time you’re watching The Batman—because a film like this definitely warrants a rewatch.If you liked this review on The Batman 2022 film, you could also check out our other reviews on Netflix’s Squid Game, Hellbound and Home Sweet Home.