In Hellbound, Earth is Purgatory: A review of Netflix’s Hellbound

This just in: the dystopian genre is on trend again. Whether this is a reflection of the state of the world right now, heightened societal interest in the human condition, or a sheer thirst for gratuitous violence, global audiences in recent years have been tuning into the likes of The Purge, Squid Game, and the newest Netflix series to hit our shores: Hellbound. 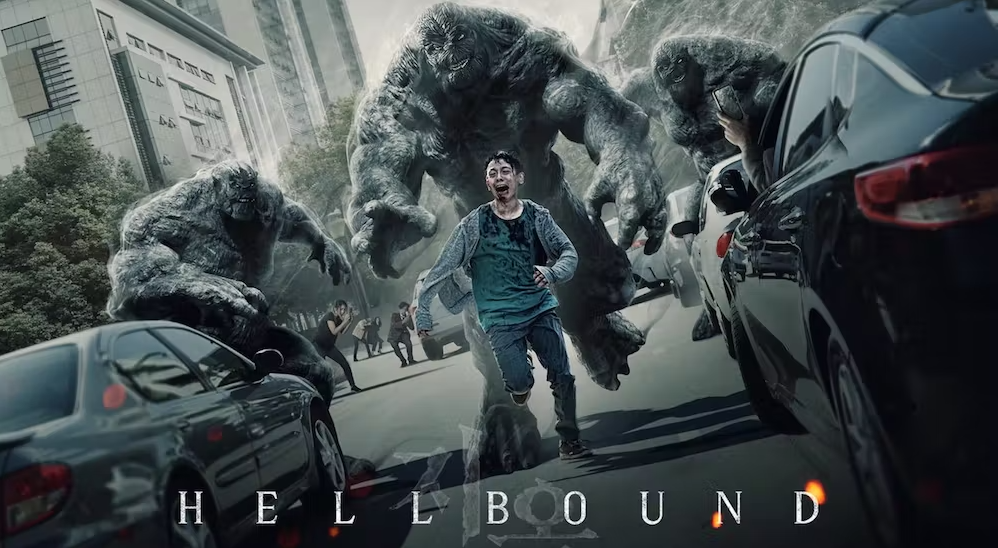 This just in: the dystopian genre is on trend again. Whether this is a reflection of the state of the world right now, heightened societal interest in the human condition, or a sheer thirst for gratuitous violence, global audiences in recent years have been tuning into the likes of The Purge, Squid Game, and the newest Netflix series to hit our shores: Hellbound.

Led by Train to Busan director Yeon Sang-ho, Hellbound is a television series adaptation of his own webtoon of the same name. It plunges viewers into a parallel universe not much different from the one we live in, save for one key difference: supernatural beings start appearing before people and prophesying their death, condemning them to Hell. This condemnation is by no means as spiritual as audiences may initially imagine: burly supernatural figures materialise on the prophesied date, hunting down and essentially beating the cursed to death before burning whatever is left of their bodies—presumably sending their souls to hell in the process. If this sounds like overkill, it’s because it is.

It’s more than just on-screen bloodshed, though. The series tackles wider societal issues including media literacy, societal inequalities, and moral conundrums concerning belief systems and religion. This is where its main appeal lies, and its astounding 43.48 million views within its first three days of release on Netflix can attest to it. The series premiere made a couple of firsts: besides being the fastest a Korean series has climbed Netflix’s Top 10 ranks, it was also the first Korean drama to be screened at the 2021 Toronto International Film Festival earlier in the year.

With Squid Game fresh in the minds of most, does Hellbound measure up? There are a few choice decisions made in this series that may not be to every viewer’s taste, but we maintain that it’s still worth giving a whirl. If you’re still undecided though, this (mostly spoiler-free!) article will take a closer look into some of the hits and misses of the series to help you make up your mind.

Before we begin however, the elephant in the room must be addressed: this is no Squid Game. It’s clear that part of the hype around Hellbound is an audience clamouring for a similar story, but this is not that substitute. Compared to the visually appealing, ironically highly-

marketable Squid Game, Hellbound takes on a more grimy look and feel—think Black Mirror colour grading and storytelling. While it does have its high tension points, Hellbound has more of a slow build than its predecessor. Keep that in mind before watching!

Hellbound follows the trail of a mixed bag of personas rather than a single main character: gentle and intelligent cult leader Jeong Jin-soo (Yoo Ah-in), pragmatic and strong-willed lawyer Min Hye-jin (Kim Hyun-joo), and jaded police officer Jin Kyung-Hoon (Yang Ik-Joon) are to name a few. This could be tiresome for some as the plot jumps from one character to another throughout the story, but also enables the series to take a deeper, more comprehensive dive into its own premise. We see the havoc unfold not just from one set of eyes, but through individuals at all stages of life at different levels of the social hierarchy.

Where viewers tend to subconsciously favour a series’ main character, the shared screen time grants them more insight into every cast members’ own motivations and fears, not to mention more scenes to show us their acting chops. Yoo Ah-in’s portrayal of The New Truth cult leader is definitely a stand-out, though; his gentle disposition, juxtaposed against his own internal instability, is a grand sight to see.

Unlike many other dystopian stories, viewers aren’t treated to any prior knowledge at all. There’s no lengthy exposition, no monotonous voiceover running for the first five minutes of the first episode—viewers are thrown into this universe with as much information as the characters themselves, that is, nothing. This lets viewers empathise with the characters so much more as they’re learning and reacting in real time as the story unfolds. They’re also given some credit here in that they’re treated as an intelligent audience trusted to pick up contextual clues throughout the series—poorly placed and written exposition, in comparison, can kill stories by dumbing down the viewer and oversharing the plot. More than anything though, they’re boring.

The main conflict in the series surprisingly appears not to be the massive supernatural creatures, but rather The New Truth, an emerging cult that successfully spins the supernatural phenomenon into a divine punishment narrative in order to propel their religious agenda.

Hit: The Social Commentary (some spoilers here, skip if you have to!)

You’d think that a show like this would have a clear antagonist—yet there isn’t. Where the script fleshes out every character’s own wants and needs, it plays out exactly like it does in the real world, where one person’s dreams must come at the cost of another. The entire series is eclipsed in shades of grey, with the audience almost entirely left to decide who to truly root for. This aside, there are some key takeaways viewers are evidently supposed to make.

Part of the reason why The New Truth cult was able to spread their cause so quickly was the result of social media. Online users in Hellbound are depicted much like a merciless mob, a bandwagon people are way too eager to hop on. The social commentary on this point may be a little too in-your-face as we’d like to appreciate, but is relevant nonetheless, especially in the age of doxxing, cancel culture, and invasion of privacy online. It’s clearly meant for users to question the role of media in their own lives, and the consequence of online actions in the physical realm.

Religion and the Law

What exactly defines your moral compass? This is arguably Hellbound’s biggest thematic concern throughout the series, as every episode slowly chips away at viewers’ subconsciously held beliefs. Does the law really serve true justice? Do people blindly follow religion? This tension is most clearly established through the interactions of detective Jin Kyung-Hoonand cult leader Jeong Jin-soo: they both clearly have their own beliefs, and ultimately seek the same goal, but their methods in pursuit of it clash entirely. This is a theme explored evein the subplots throughout the series.

It doesn’t take a pro to recognise bad CGI, and unfortunately, Hellbound is a victim of it. It’s not awful, but simply not believable—yet this is a core function all CGI should achieve. It takes away from the seriousness of the series given that the demonic monsters viewers are supposed to fear look kind of cartoonish, with the tension fizzling out there. If you’ve got high expectations when it comes to special effects then this may be enough to turn you away, but we believe that it gets less jarring once you get used to it.

All in all, we’d say this series is worth a watch. It admittedly leaves audiences with more questions than answers, but where’s the fun in knowing everything? The ending especially sets itself up for another season...

Care to read more of our reviews? Catch our hot takes in our review of Sweet Home and Vincenzo!